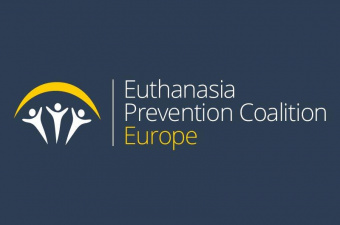 A new coalition is being launched in Brussels on Wednesday 13 November 2013 to combat the growing threat of euthanasia across Europe.

The Euthanasia Prevention Coalition Europe, (EPC-Europe) brings together organisations and individuals from across the continent to campaign against the erosion of laws that protect people from euthanasia.

This new campaign group will act as a powerful voice against attempts to change laws across Europe that protect people from euthanasia and assisted suicide.

Dr Kevin Fitzpatrick, OBE, Coordinator of EPC-Europe said: 'The UK, France and Germany are currently considering legislation, but overwhelming evidence from jurisdictions where euthanasia and physician-assisted suicide is legal, such as Belgium and the Netherlands, demonstrates beyond doubt, how quickly and easily euthanasia is extended to others, especially disabled people and elderly people.

High-profile cases here have provoked international outrage leading commentators to think of Belgium as the new world leader in exploiting euthanasia against those with disabilities and mental health issues for example.'

The group will highlight cases of euthanasia in Belgium including those of Mark and Eddy Verbessem, the 45-year-old deaf identical twins, who were euthanised by the Belgian state, after their eyesight began to fail; and the case of Nathan/Nancy Verhelst, whose life was ended in front of TV cameras, after a series of botched sex-change operations. His mother said she hated girls, found her child 'so ugly' at birth and did not mourn his death. And the case of Ann G, who had anorexia and who opted to have her life ended after being sexually abused by the psychiatrist who was supposed to be treating her for the life-threatening condition.

Dr Fitzpatrick continued, 'The lack of proper social care in Belgium as well as medical failures, mean non-terminally ill patients are left with no choice and suffer fatal consequences. Euthanasia has also begun in Belgium for organ donation, and for prisoners.'

EPC-Europe will also warn that Belgium is currently considering extending euthanasia to children. 'We all know that euthanasia is already practised on children,' said the head of the intensive care unit of Fabiola Hospital in Brussels [1].

In the Netherlands disabled new-born babies are euthanised under the Groningen Protocol, on grounds of 'their perceived future suffering, or that of their parents'. This includes neonates with spina bifida.

As Baroness Tanni Grey-Thompson, of the British House of Lords said: 'If that had existed in the UK when I was born there is a possibility that I would not be alive now. I would never have been allowed to experience life and my daughter might never have been born.'

The group will highlight changing attitudes to disabled and vulnerable people, saying that those with physical and mental disabilities, elderly and poor people must be given the same protections as non-disabled, wealthier people.

In the Netherlands the number of deaths by euthanasia has increased by 64% between 2005 and 2010 [2]. In comparison, the Dutch population grew by less than two percent over the same period [3]. Yet the Dutch are now discussing the extension of euthanasia to people with dementia despite huge concerns about proper consent.

Dr Fitzpatrick concluded, 'EPC-Europe brings people from a wide variety of backgrounds together to oppose the legalisation of euthanasia and assisted suicide, promote the best care and support for vulnerable people and to help people to find meaning, purpose and hope in the face of suffering and despair. We invite others who share our concerns to join us and work alongside us.'

We will work throughout Europe, and with like-minded people and organisations across the world.

[1] Comments to the Belgian Senate's Judicial and Social Affairs Committee at a hearing February 2, 2013.