"I'm always being told, 'If I was like you I'd kill myself'" 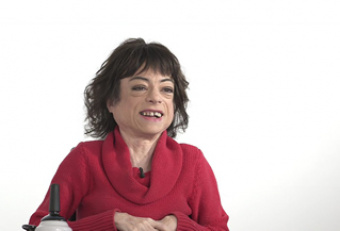 Disabled actress/comedienne Liz Carr fears that euthansia will further devalue the lives of the disabled in the eyes of society. In an insightful speech, she raises concerns that the vulnerable will be exploited and killed should 'assisted dying' be legalised.


Disabled actress and comedian Liz Carr has given a powerful speech against proposals to introduce assisted suicide during an address for anti-euthanasia organisation Not Dead Yet UK.

She joined disabled people who had travelled to Westminster to lobby politicians on Labour MP Rob Marris' assisted suicide Bill, which will be debated in the House of Commons on 11 September.

They held signs and later delivered a letter to the Prime Minister at Downing Street.

After being introduced by former Paralympian Baroness Tanni Grey-Thompson, Carr said the Marris Bill is "about making suicide socially acceptable when it is actually something we should be trying to prevent".

"But I don't want to die. And to talk about choice when so many vulnerable and disabled people do not have a choice about basic care, housing and support is to put us in a very dangerous position indeed.

"This is really serious. It's about life and death. If this Bill becomes law some disabled and vulnerable people will be subjected to exploitation and abuse and will die as a result."

The actress concluded by appealing for people to oppose Rob Marris' Bill when it is debated in the House of Commons in the autumn.

Supporters of the Bill say there are criteria to prevent abuses, but the British Medical Association has warned that "there is no way to guarantee the absence of coercion in the context of assisted suicide".

Dr Kevin Fitzpatrick OBE, spokesperson for Not Dead Yet UK, said: "Safeguards? Who can guarantee the safety of another person, especially if they face the most terrible decisions at the end of their lives?

"Patient safety is the core of best medical practice. We are generally very safe; but it is mere pretence and dishonesty to say we can create and enforce 'safeguards' at all times for everyone."

Last week the shadow disabilities minister expressed support for legalising assisted suicide, but admitted she knew many disabled people will be "horrified" and "outraged" by her stance.

In an interview with the Disability News Service website, Labour MP Kate Green said she did not accept disability rights campaigners' arguments against changing the law.

In response, Not Dead Yet UK called for Green to resign, labelling her views "shocking" on Twitter.

And disabled Peer Baroness Campbell said she would seek an urgent meeting with Green to explain why legalising assisted suicide "is such a threat to disabled people's safety, feelings of self-worth and right to equality".